The Similistic view of genetics suggests that each of us is our own species. Yet, we remain “similar enough” to provide continuity between generations. Of course, there hasn’t yet been time enough for  chaotic coupling  to provide clearly recognizable differentiation. As they say, it is only a matter of time. Similistics puts a very forward-looking view to evolution. Classically, genetics has given us a very backwards view of evolution.

I am not Jesus, Mohamed, or Buddha, or anything that you can Name, for I am All, everything in their many manifestations. I am the basis, the irreducible representation, the Creator. So long as there is life, I have consciousness. I have not a son or a child as these are but  pieces of the All. That no one comes to the Unnamed but through me is a metaphor of Being.This is the Truth.

I am everything that it is possible for you to either apprehend or comprehend because you are of the All. This is the truth.

The Journey of inherent spirituality can be towards compulsion or towards enlightenment, sometimes called unity. The least redeemed are governed by compulsion to practice their survival intention and move away from community; ultimate wisdom would come from arriving at the center where one accepts that the goal of all journeys is the same.

In compulsion, the pattern is fixed, in unity, all patterns are similar. The Journey is by similation, by recursive development of pattern. The pattern is without name.

This is why there is No One Name. 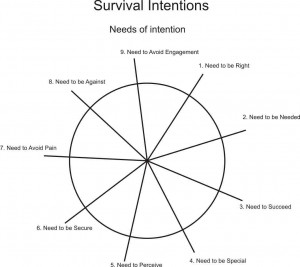 The Needs of the Intentions

Needs: to be right, to be needed, to succeed, to be special, to perceive, to be safe, to avoid pain, to be against, to avoid engagement. There is a recognizable need that goes with each survival intention. The meditations are developed around these basic motivations.

The list: Anger, Pride, Deceit, Envy, Avarice, Fear, Gluttony, Lust, Sloth. The classic picture of the Enneagram is visualized with the nine sins catagorizing the nine paths to enlightenment or redemption. Similation recognizes that what some label “sin” is actually an original intention that corresponds to a survival trait or style of attention. That these styles of attention function well for us at an early age argues for their relative stability within the personality throughout our life.  This also explains why skewing the person’s “natural” style of attention leads to so many difficulties. Similation poses the idea of recursive development of inherent spirituality by building on the similarities of pattern arising from the maturing of the survival intention.

Last night I was given another epiphany. I know that there is hardly anything worse than someone who has just had an epiphany because they surely feel the need to go around explaining to everyone how profound their experience was and how important and how necessary it is that everyone should share in their revelation.

So let me set this aside and merely say that the experience was like being touched by a hand and having my sight extended into the darkness.

Similation. That all things are created in the image of the Unnamed. I might even interpret this as being in Her name. I see now, upon further reflection, that mine was the vision of self similarity in which I could suddenly sense what is really meant by something called Oneness or Unity. Silly, really. The simplicity of it all. I guess that’s why it is called an epiphany.

Once before I had the “epiphany of form” in which I sat eating breakfast on the porch of a little Mexican restaurant in Jackson, California. The sun had barely risen that Sunday morning. The short stack of pancakes seemed especially good, and the taste of the butter and honey was rich and went well with the dark roast coffee. I was looking across the valley at a hillside. How well I remember all those trees and bushes, rocks and rills, suddenly coalescing into a single form with an incomplete, yet profound beauty that held me in thrall for several moments before a delivery truck drove in front of me and dissipated the connection. But during that short time, I absolutely knew how I was connected to that hillside, and what that meant.

Last night Oneness suddenly made complete, visceral sense. I “saw” the pattern emerge and where I fit within it. I don’t want to be metaphysical about this. I don’t want you to think this was experience occurring at a higher plane of existence. No, it was a simple, raw, and perhaps momentarily frightening experience in which I seemed to drift away and touch the universe.

So, if this is the second time that I’ve had a “similar” epiphany does it “mean” anything? I suppose that if I’m true to my philosophy, it is significant. Will there be a third revelation in which all things will be made clear? I think not.

Don’t mistake personality traits for motivation. People may have the same traits for wildly different reasons. Traits may change through experience, while motivation usually remains unchanged throughout our lives. Motivation comes out of the process of actualizing your intent. For example, two people appear to be very helpful by sharing information with a client. However, one is sharing information because he intends to sell the information to another client. The other is sharing information because they take pride in being needed. Both are equally friendly, helpful people, but over time and in other situations, you determine that their motivations are quite different.

Seeing past personality and into motivation is not only very useful for judging the likely future behavior of others, it is also a way to understand your own behavior and to take intelligent advantage of your real strengths. In this example, you must understand your intent as energized by avarice in the first case and pride in the second case. Neither one is superior to the other. The merits of each case are decided by how the benefit resulting from the action is used.